Kandos and the Convent would be a fitting setting for Alfred Hitchcock’s iconic film, given the multitude of birds in the area. I’ve been told that most varieties of native birds can be found here and definitely seen birds I’ve never seen before.

Of course there are the usual suspects, masses of Sulphur-crested Cockatoos – the characters and vandals of the bird world. I’ve all but given up on seed bells as they just unhook them half way through and fly off holding the remainder by the wire.

Also Galahs (I’ve had a family with babies), Rosellas, Rainbow Lorikeets, King Parrots – far more peaceful than their other parrot family members. For the first time in the wild I’ve seen the yellow tailed black cockatoos – they come out and scream across the sky with their mournful cries just before rain. I don’t know why they seem to always fly in threes – maybe they just have one chick each nesting?

I’ve found wild quails in leaf litter on the back porch. Lots of lovely tiny wrens – willy wagtails, little blue and green wrens who love to have showers on the driveway when the spray hoses are turned on. Of course sparrows – I’d forgotten how long it’s been since I’ve seen sparrows in my area in Sydney.

Lots of tiny pretty finches, including the pretty little zebra finches which I’ve only seen in captivity. The latest are the tiny little hummingbirds who just hover in the air and have discovered the salvias and sages. 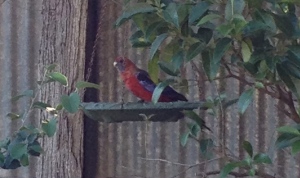 Given I’m currently cutting down neglected old shrubs, I’m mindful that these are also homes and protection to local wildlife and endeavouring to pace cutting down with replanting and growing, supplemented by bird feeders and bird baths. It’s comforting to notice that the birdlife appears to be growing rapidly rather than depleting as they find seed, water and new plants. Roxy lives for finding and chasing the local wildlife, but the block is large and she barely makes an impression on the birds. The magpies take delight in teasing her and given her mini status, I sometimes worry she’ll end up lining a bird’s nest.

Anyway, I’ve gone from someone who though bird watching was incredibly boring to buying a bird species book and ordering binoculars! Today I also bought a hanging timber bird feeder which is far more practical than my feeding efforts to date. I’ll post photos of the feathered locals as I manage to capture them.