Last night I did the country music thing with some Sydney friends. Every few months some of the intrepid locals organise a country music night at one of the village halls with live music and a country hospitality style feed. To make it even better, local buses pick up and drop people off at their doorsteps.

Ilford is a tiny village around 20ks from Kandos – no shops just a local community with a hall down a country road surrounded by paddocks. Locals told us that in true community spirit, the hall was built during the day and a dance held that same night.

The country music night kicked off with supper – for $3 you had a choice of sausage sizzle laden with caramelised onion or a delicious lamb stew topped with mashed potato. We were warned to hold off overdoing it as supper was still to come.

The group playing was Peter Coad and the Coad sisters – and how talented were they!?! Obviously a group that had much more than made their name at Tamworth having performed widely in the States with many of the top line C&W Nashville greats. I’ve always said, “never underestimate the drummer” and it could not have been more true in this case with the drummer, Jim Hermel, turning out to be a guitar virtuoso, although the jury is still out on whether he was better than his talented wife, Virginia.

After a generous session, we broke for supper which turned out to be a lip-smacking country hospitality style spread of hot finger food, cakes and slices, including much to my Sydney visitor’s delight, scones with jam and cream. Back for some more rollicking music. After so much more than our money’s worth of three hours of toe tapping, foot stomping singalong music, the night came to a reluctant end. The band were still going strong with as much of an adrenaline rush as they had started the night. Fantastic value.

As we boarded the bus back home on a cold dark and damp night, I couldn’t help but reflect as my name was called out during the roll call (God forbid if anyone missed the bus back home!) how much my life has changed over the past two years and that I wouldn’t have missed a minute of it. 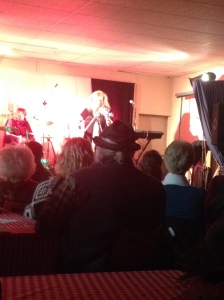