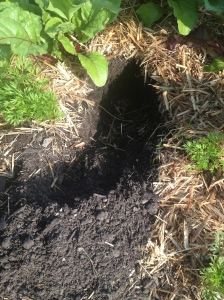 I dismissed this at first and unfairly blamed Roxy, however this is now the fourth time and the last two happened when we were not in residence.

It’s past amusing but increasing in curiosity. The neighbours have all been in to inspect and offer opinions.

Each time it has been in the same position between the carrots and beetroot in the same bed. There are now a few indications of scratchings and small holes in other parts of the garden, but nothing of this scale and repetition.

So far covered have been

At this stage, all suggestions are welcome. I think the only way we will find out is with a web cam. G’s suggestion of blanket, torch and alcohol for a night sit-out is not appealing now the weather has turned nippy. A farmer’s life is not an easy one!