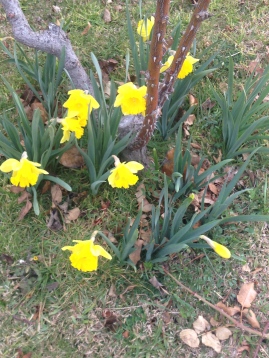 We are now in the countdown to Spring, which means a focus on the garden – quite a contrast to my first sleepy mid Winter in residence here in Kandos. 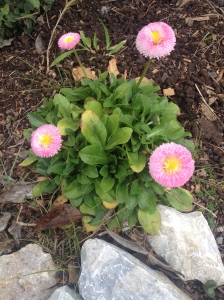 The last few weeks has since me increasing my time outside – weeding, clearing, pruning, feeding and mulching and, of course, planting. The Convent will be on show for the Centenary Celebrations over the long weekend in October and again for Cementa_15 in April. To ensure the garden makes an impact, I’ve been planting out existing beds and creating a few new or extended areas. 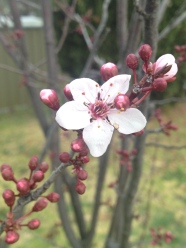 For anyone who saw the place last year, the startling difference will be the privet demolition – not sure if it will have started to strike shoots by October. The roses were also so new before. Hopefully they will now get a kick-along and be a little showy for the garden opening.

I kept seeds from last years’ flowers and am sewing these in the hope of some success. The garden work is substantially different from this time last year when it was hard graft digging and laying new garden beds and so much planting. This time around, there’s still some planting but to a greatly reduced degree and really mainly focussing on now filling in the “in-between” areas. However I wouldn’t underestimate the work in pruning, clearing up, mulching and feeding. I always wondered what people would buy the ginormous 10k buckets of rose food and now admit I’ve turned into one of those people. I think I’ve already used 6 bales of straw mulch – and I only use that on some of my garden beds. I’m also up to around 5 large bags of Eucy mulch and reminder for next year – at least 6 large bags of pine bark mulch for the back bed. There’s also probably half a dozen bags of Dynamic Lifter in the garden, much to the dogs’ delight!

The dogs love being out in the garden with me and all have their different interests. Tango oversees hole digging, to the point that I can only put the shovel into a hole once and then have to move onto a new area. She’s making sure she doesn’t miss out on any of those tasty grubs! Roxy just plonks herself down where I’m working – not near, actually on. If there’s freshly turned turf, newly planted areas or newly mulched areas, she’s lying there. Popcorn is an expert at the kissing attack. If he sees me kneeling in the garden, you can bet he thinks I’m fair game for a set of sneaky slobbers. He’s also King of the Diggers and, as a big dog, can dig some mighty holes. Of course they all love Dynamic Lifter and act as Hoovers when it’s spread in the garden.

It’s so rewarding to see the plants start to come back to life. Some of the plants I’m yet to see any growth on as they were almost dormant when I planted them, so to watch them through a leafing and flowering period will be exciting – a little like your children’s milestones.

In the meantime, some of the bulbs are doing their thing – mainly the snowdrops, delft blue hyacinths and Erlicheer daffodils, with a few yellow daffodils beginning to sneak their way in.

This Blog is now becoming useful to me as a diary to see what the garden was up to last year and when I might expect to see plants in action. I’m hopeful there will be surprises and delights in store that hold on through to April next year.

One thought on “Readying for Spring”